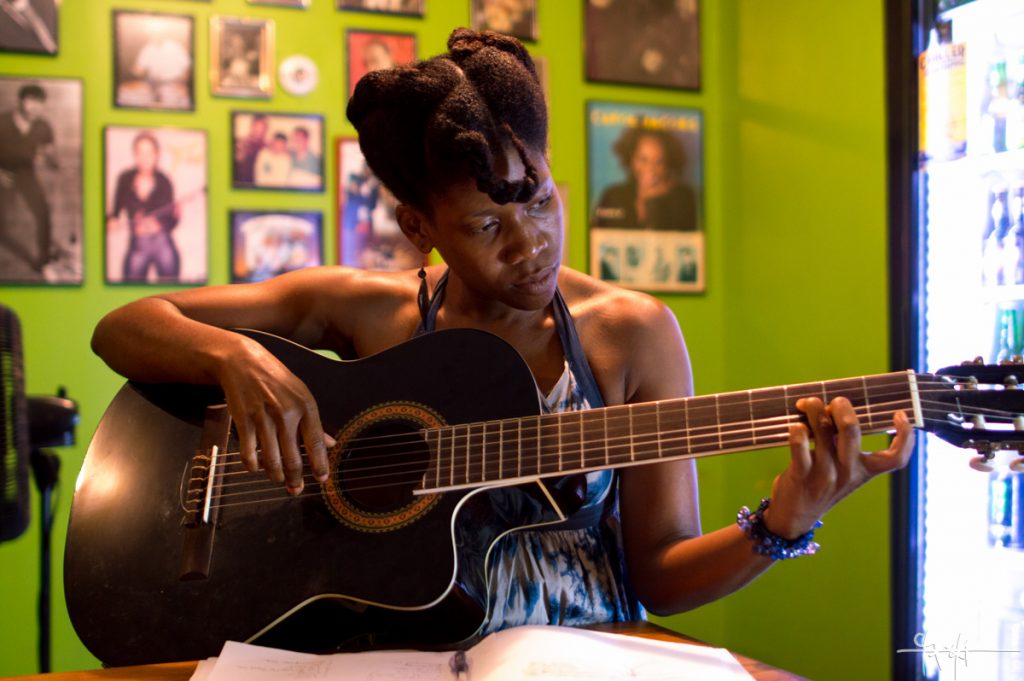 Category of Artist
Singer Soloist
Artiste, or LMD Artiste
LMD Artiste
Short Bio
Nzingha is a singer/songwriter/composer/music educator whose earliest influences are David Rudder, The Mighty Shadow, Lord Kitchener, Merchant, Simon and Garfunkel, REO Speedwagon, Journey, Bryan Adams, and Anita Baker. Later influences include Sixpence None The Richer, Sarah McLachlan, Alanis Morrisette, Alice Merton, and any number of New Age, Neo-Soul and Folk artists including Kitaro, David Linklater, Bonnie Raitt, and Sheryl Crow. Even later influences (or earlier if you have an ancestral view) include all Sara Tavares and many West African musicians, most notably Habib Koite, Baaba Maal, Fatoumata Diawara and Sona Joberteh. As a result, her music is eclectic, relatable, and either gently stirring or soothing, while the messages of her lyrics always strive for a sophisticated simplicity, with the goals for deepening insight, empathy and understanding, both of what's within and what's without. Nzingha began writing poems as soon as she learned to write, but began singing seriously at the age of eleven in 1992 under Gretta Taylor who was then her music teacher at St. Joseph's Convent Port of Spain and continued to win a May Johnstone Cup with Vanessa Bushe, as a duet for the national music festival in 1999 under Michele Varley, also music teacher at St. Joseph's Convent Port of Spain. The school also won choral distinctions with the tutelage of Dr. Roger Henry, now director of UTT Performing Arts. Nzingha trained vocally in the United States under Dr. James Niblock, choral director of university chorus for two semesters, achieving her Bachelor's Degree in Music (Voice) from Colgate University. She has also trained vocally in Trinidad under Dr. Ruby Mallik, a renowned professor of Indian Classical Music at UTT, for two years, achieving her certificate in Indian Classical Music. She trained under Mrs. Mary Rivas and Mrs. Margaret Ince for piano, later learning harmonium with Rana Mohip. She has studied bharathanatyam with Sri Sudharani Raghupathy of Shree Bharatalya in Mylapore, Chennai and later studied it with Alana Rajah of the Kalakshetra school of bharathanatyam, also in Chennai. She is currently training with Prashant Patasar in the tabla, having studied the veena and mrdangam with Rajalaksmi (deceased) and her son Govind of the University of Chennai respectively. She has written extensively in various facebook notes and as a result, appeared on TEDxPoS in 2012 speaking about her experience with sexual assault as a virgin. She is currently studying online with the British Kodaly Academy in secondary music methodology with a view to enhancing her experience as a teaching artist (high school music teacher) and becoming a uniquely educated entrepreneur in the music industry.
Genre
World
Last Name
Job
First Name
Nzinga

Member since 2 years ago
View Profile