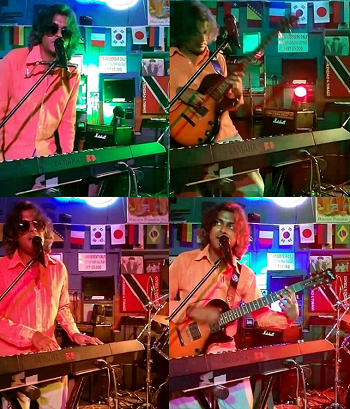 Category of Artist
Singer Soloist
Artiste, or LMD Artiste
LMD Artiste
Short Bio
"Rahil Babooram is a singer/songwriter/musician/1-man-band on his recordings [vocals, guitars, bass, drums, keyboards, percussion, etc.], but when he performs live, he either plays solo or gets together a backing band depending on the scenario. His style is generally rock/pop (influenced mostly by 1960s-1990s bands). He has been publicly performing since 1997 (when he finished highschool, but even during school years he was performing at school events).. He has been singing and composing his own songs and recording them on cassettes since age 10, but only seriously from age 17 (1996/7) when he recorded his first album’s demo [‘Gaura-Vani’] which was subsequently re-recorded in real studio (on cd) in January 1999. He released his 2nd and 3rd albums ('Simply Rahil' and 'Orange') in 2005 and 2006 respectively, and his 4th album 'Cuatro' was released in 2013. He has had a few #1 charting songs (such as 'All on you' and 'Heartless') on the Indigenous Radio programme in Trinidad (and some #2s, #3s, etc. as well). He has also had the privilege of being on television and in the newspapers to promote his music at various times in his career. He has performed at many types of venues and shows throughout the years on his own behalf, as well as playing for other bands. He also has been performing within the scope of the Music TT's Live Music District. During the covid-19 lockdown era, he has been performing more often on online platforms (sessionslive, fb, etc.), and has been releasing new singles from home-recordings, up to present time.."
Genre
Rock
Last Name
Babooram
First Name
Rahil